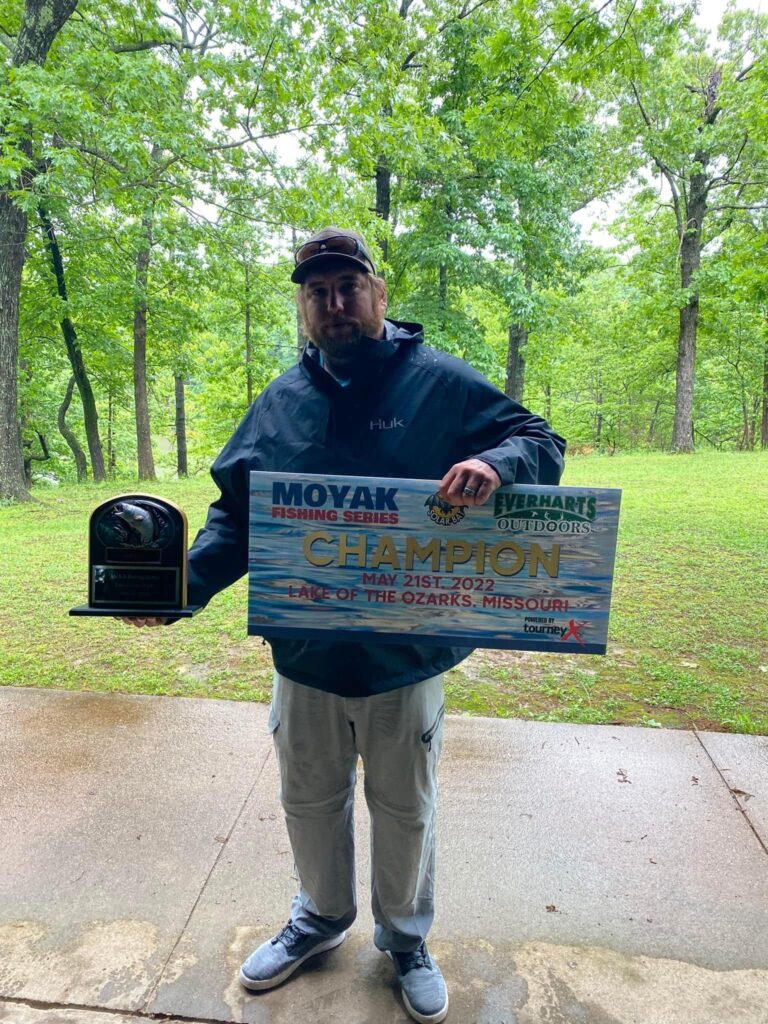 Stop #2 of the 2022 MoYak Lake Series started off with several thousand BANGS!   Our second event of the season was not to be outdone by the 45mph winds at our earlier event on Table Rock.  Lightning, hail, gusty winds and rain in every direction was the order of the day on LOZ… but, hey, we didn’t have much boat traffic.  Your top three were

Let’s see how they figured it out;

Michael – I had a good feeling that with the stage of spawn and the beautiful weather that we were supposed to have, topwater was going to be it for the day. I prepped 4 rods with buzzbaits, 2 wake baits, a wacky rig, and 1 crankbait rod.

Scott – I had 3 patterns worked out and good to go but the weather wasn’t having it, so the night before I just decided to abandon all and just beat the bank in an area where I knew fish should be.

Josh – Fish fast and try to cover water in order to find the areas I thought would be holding fish.

Michael – I chose not to prefish this year and it seemed to help. The area I fished in I have been to in the past, so I had a good idea of what was there.

Scott – I was able to prefish one day just over a week prior but the water was chocolate milk with so much debris it wasn’t even worth doing.

Josh – Yes, I prefished my tournament spot and found a decent pattern using a KVD 1.5 on rock banks with wood. I’ve never fished boat docks before and decided not to make this tournament my testing grounds.

What was your best finish before this one?

Michael –  This is my best finish at LOZ and all time! This is my first win in a kayak tournament. My finish last year on LOZ was 30 something I think.

Josh – I had never been on LOZ before, so I looked for water that is similar to what I’ve fished in the past on other lakes.

What was the general tackle you used to win?

Scott – Since the weather was so bad I knew the topwater bite was going to be on fire so went with a good bait to call the good ones up and cover lots of water.  As soon as the rain stopped the buzzbait bite died so I picked up another favorite that covers tons of water…. Flatside OG .  After covering the same areas with the flatside i had to switch it up again went to the far back of a cove where the water was glass smooth and chucked a 5.5” walking bait, made about 5-6 walks and the whole cove exploded! Not really but the 20.25” got it!  After that, the bite just shut off and had to swallow some pride and pick up the sissy stick. 5” yum dinger!! Got another upgrade. Ended up catching at least 30-40 bass throughout the day.

Josh – Every fish was caught on a Sexy shad KVD 1.5

Michael – The nastier the weather got the better the bite. Both 20”+ came when I probably should have been under shelter and not tree canopies!
The big bass 20.5 inch fish came on Buzz bait. She completely ate it. Blade and all!  It was in the first major storm I came out to the point of the pocket to start working back in and threw up over some trees and she smacked it. Got it in the boat had to keep her in the net while I try to get situated to take a picture the rain came down even harder, got her submitted and finished on. Made it down The bank another 50 to 75 yards while catching in 18”,  17” caught the 20 1/4. All my big fish came on the Booyah buzz bait.

Scott – Yeah I like fishing in the bad weather but not quite that bad though any day out on the water is a special day, always something to learn. 20.25” isn’t quite into the big bass range but when she inhaled the walking bait it looked like a 5 gallon bucket sucked it down! 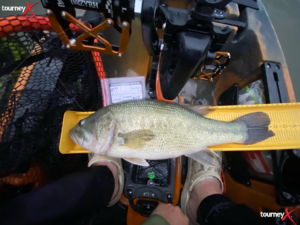 Josh – While sitting in the truck waiting for the storm to pass I saw we would have about 30 min of a break between storms so I decided to head out and try to get to a row of docks before it got bad again.  On the way to those docks there was a small indent in the bluff wall that I decided to make a few cast (It looked like I had some time before the next storm cell got to me) caught a 13 and 2 cast later I caught the 21.75. I was trying to get my scale out to get a weight on her and the lightning started and it was close. My scale was stuck in my crate and as I was messing with it a strike of lightning hit the bluff on the other side of the lake and I decided it was time to go!!!  I took a quick release video and booked it for the docks, my big water pdl can cover some water!

Michael – Just the big girls in the water!

Scott – Actually nothing more than the occasional water snake.

Josh – More snakes than I care to talk about!

Scott – Had lots of short strikes on the buzzbait and had 10-12 hooked up but still lost them even with a trailer hook ….. no idea the sizes though.

How far did you have to travel to find your fish, what depth range did you target and are you willing to share the general area of the lake you chose?

Michael – I covered about a mile back-and-forth from the ramp out hitting the natural banks with laydowns on them. I did not fish any dock or catwalks this go around. All my fish came from 4 to 6 feet which seemed to be the old shoreline before the water came up.

Scott – I launched at PB2 and only had to go to the edge of the cove where the no-wake zone ends. With the weather being how it was I knew I didn’t need to waste any time deeper than 3-6’

Josh – The creek I was expecting to fish was about 1.5-2 miles from my launch.  I owe my success for the day to the storm.  Since I caught a couple of fish in that small area near the dock I decided to fish it again once I saw a break in the storm.  On the way back I caught 2 that were each 17.25 and an 18.25. I caught 87.5 inches in a stretch no more than 200 yards.  The crank bait had to be digging in order to get any action, as long as there was wood under 6ft depth I cast at it.

Did the weather affect your bite?

Michael – The harder it rained and flashed the better the bite got. Once the rain stopped my bite slowed down tremendously.

Scott – Absolutely, when it was raining they were hammering the buzzbait, when it stopped raining I couldn’t buy a bite on it!

Josh – Once the storms passed the big bite slowed but I caught more fish than I can count.

Do you plan to fish the remaining MoYak schedule?

Michael – I will be at the remaining MoYak tournaments looking for redemption at Truman as I finish 10th there last year.

Scott – Absolutely. I’m planning on all the live events “On the Lakes” looking forward to seeing everyone there.