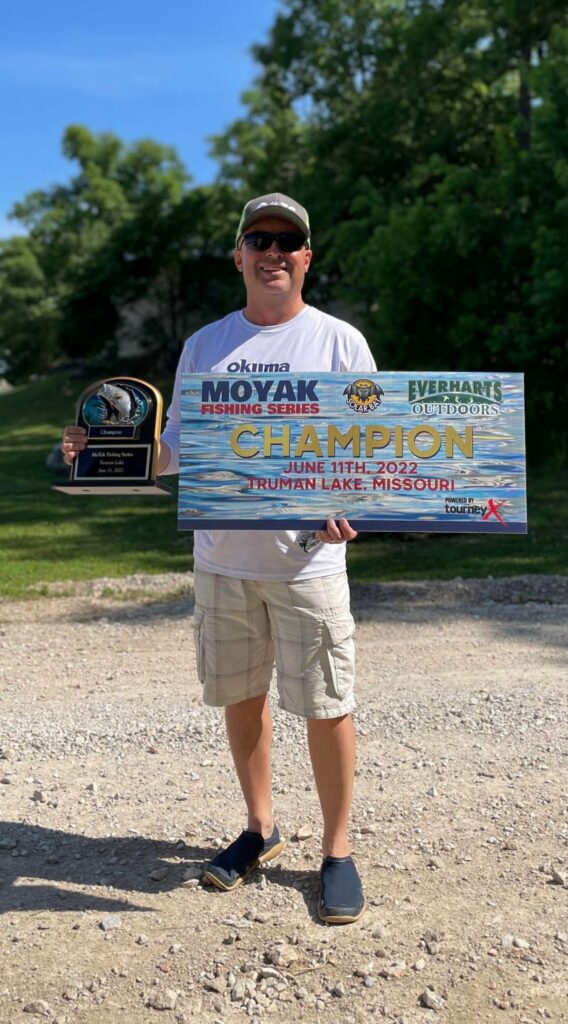 The third stop of the 2022 MoYak Lake Series was a scorcher! Sixty degrees at launch and a forecast of mid 90’s greeted 89 MoYak anglers at this early June event on Truman Lake.

With the lake flooded 11 feet and a quiet practice for many, this one was set up to be a grind. The numbers bore this out as we had an FPA (fish-per-angler) of 3.72 and 46% of the field submitting a limit of bass. By comparison, at our2021 June Truman event 82 anglers were fortunate to put 4.02 (FPA) on the leaderboard with, again, 46% of the field fielding a limit. It’s the start of a troubling trend for Truman in June if you look back to 2020 where we had 58% of the 78 yaks with limits, Jim Harding breaking 100″ and an FPA of 4.97.

Not only did we have to deal with the elements and a fish population in transition, but connectivity issues plagued most of the field all day. Several anglers reported their inability to get fish submitted—even though their phones showed bars of 5G service!

The top of the field found a way to overcome these obstacles—with yours truly coming out on top. Here are your top ten for the 2022 MoYak Stop #3 Truman Lake presented by Everhart’s Outdoors and hosted by Bucksaw Marina.

Let’s see how the top five figured it out;

Troy – Truman has always been a mystery to me so this time I just decided to enjoy the fact that we were not dodging lightning bolts and hailstones and instead just go fish.

Trevor – My main strategy going in was to ride out the topwater bite; throwing a buzz bait and popper, until it quit, and then junk fish after that. The top water bite didn’t pan out, so I picked up my flipping stick and went to work.

Chad – Start off early with Head Knocker buzzbait on flooded grassy areas – my topwater bite from practice wasn’t there. Caught 2 on a fluke.

Johnathan – I really had no strategy. Just came with an open mind set and was going to fish as hard as I could.

Troy – I usually fish the Pomme arm but with the lake up so high and lots of muddy water, I decided to try spots nearer the dam area.  I only had a few hours to practice, with most of that visiting ramps and checking water clarity.

Lance – I pre-fished the weekend before the tourney. I was able to find fish but was unsure how much the water would drop before the tournament. My pre-fishing did help my confidence but didn’t help me to replicate the same bite.

Trevor – I was not able to pre-fish due to work, but I did come up the night before and look at boat ramps, along with attempting to find cell service opportunities for a few hours. Where I chose to put in, I knew it would be more of my style of fishing, and I ran with it.

Chad – Absolutely – found an area that was holding some better fish – caught 2 in practice and left so I didn’t know what it’s full potential would be.

Johnathan – I fished Truman 2 weeks prior to the event. Other than that there wasn’t much prefishing.

What was your best finish before this one?

Trevor – I had never fished Truman in my life before Saturday morning. This was only my third MO-Yak live tournament.

Johnathan – Before this event there has been no best events. It’s been more like catch one fish and go home with your tail between your legs. Truman is a different animal.

What was the general tackle you used to win?

Trevor – I flipped numerous baits but the only things I could get a bite on was the trusty Brush Hog and Pit Boss. Most catches were on heavy braid and a big tungsten weight. I did catch a pair on a big worm and a flipping jig.

Johnathan – I started early with a Buzbait and was able to get a couple bites. Quickly switched over to a bladed jig. My best bite came flipping a secondary point with a MOtion Fishing HawgIlla.

Troy – Special? Can’t beat the outcome. Nothing better than being able to share a win with family over the phone on the drive home. My biggest bass came at the very back of a creek in about a foot of water under a rootwad of an inside channel swing. She crushed the chatterbait soon as it hit the water.

Lance – My big bass was DQ. I took three 1 second videos instead of photos. This is a good reminder for everyone to check your photos before you release your fish. Other than that, I fished clean.

Trevor – I was fortunate enough to have my wife along on the trip, and it was great to do well after I got her up at 4 AM. I know the day was hectic for everyone as far as service and submitting fish, but my plan to get off the water early and find service worked in the end. I was able to fish fairly clean, only losing one keeper
and a spinnerbait. Not really any big bass, but I did catch a 22’’ walleye flipping bushes.

Chad – I feel like current flow had changed. My area dirtied up overnight, bite changed, and more trash in the water. I think they may have slowed or stopped flow temporarily and backwashed into my area.

Lost my 2nd biggest fish – was in the boat and then it wasn’t. Funny video of it on my FB/IG pages

Troy – I was visited by a 4lb drum at around 2 pm on the end of my chatterbait as I drug it past a laydown. My heart can’t take that kind of crap. #Gooooooooo

Trevor – I saw more carp than I had ever seen in my life.

Trevor – Just one small one, possibly 12”. I was very fortunate.

How far did you have to travel to find your fish, what depth range did you target and are you willing to share the general area of the lake you chose?

Troy – Dam area. Tried to fish shaded cover in 4 feet or less. My spot was about a half mile from the ramp.

Trevor – I fished the southern end of the lake, most of my fish were within a mile or so from my ramp. But I covered almost 7.5 miles. I wasn’t too worried about depth; I was more worried about finding bushes that were submerged up by the bank, or any bush/brush that had the top out of the water. Most of my fish all came off of bushes that had a few leaves out of the water, or I could visibly see the top just underneath the surface. With the water clarity I was dealing with, I had to have dropped it right on some of them.

Johnathan – Grand River arm. Typically fishing the creek I was in is like playing plinko with kayak but since the water was so high I was able to save some time crossing a peninsula. Early I was just staying in an area where I was seeing fish bust. I was in about 11ft of water fishing a shallow area with flooded brush.

Did the weather affect your bite?

Troy – It forced me to the shade and luckily the bass were there too. I caught fish steadily—about every 20-30 min—throughout the day with my last ~3″ upgrade coming in the last 5 minutes.

Lance – I would say yes. Bluebird sky had me fishing a jig for the last four hours of the day. I would normally not do that. I caught three upgrades with the jig.

Trevor – I believe so, I had a decent limit by 7:30 and then the heat turned up. I went almost 3 hours after that without any bites. I caught my last fish around 1:15. I only managed 8 Bass, a walleye and a white bass, the heat definitely affected the bite.

Chad – As sun got higher bite got tougher.

Johnathan – Yes, once the sun came out the bite slowed down alot. Later in the afternoon the wind picked up and that seemed to help the afternoon bite.

Do you plan to fish the remaining MoYak schedule?

Trevor – I currently plan on fishing all Monthly and live MoYak tournaments the rest of the year.

Johnathan – I am hoping to make all the events this year! 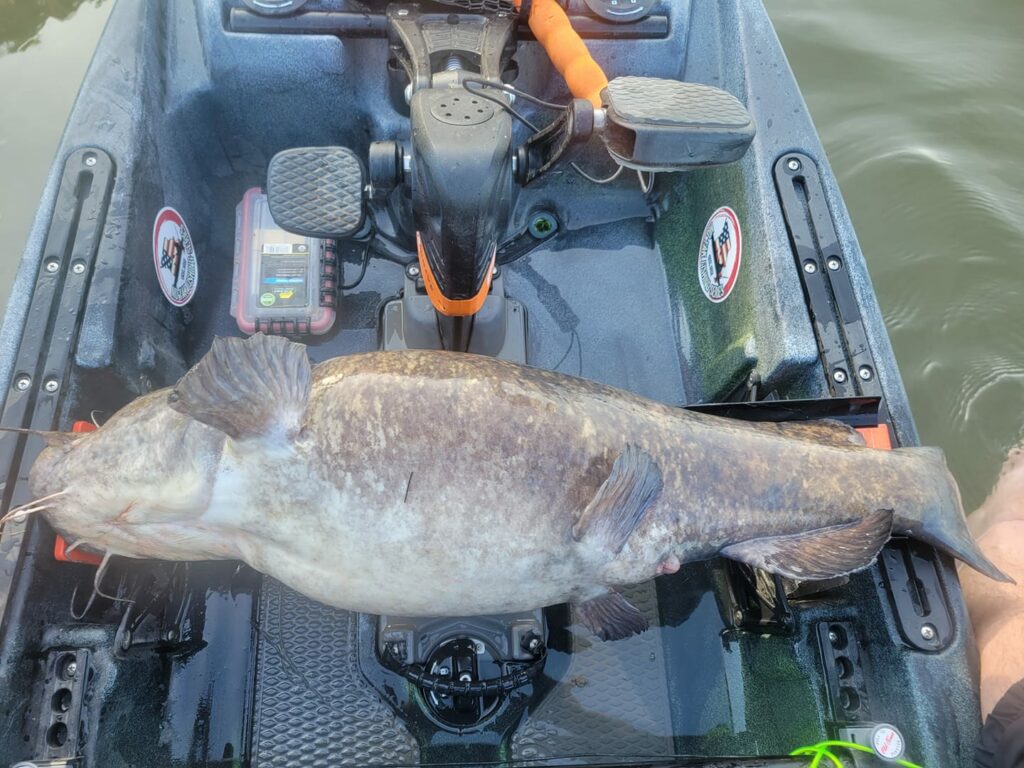