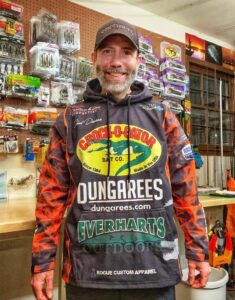 BIOGRAPHY
I live in Columbia, MO with my wife and daughter. I have been competing in bass boat tournaments for over 20 years, and starting in 2021, I decided to make a change and fish out of a kayak. There is something special about the simplicity of a kayak. I really like the aspect of releasing fish right away where you caught them.

In 2022, I will primarily be competing in the following circuits:
– MoYak Fishing Series
– All American Kayak Series
– Bassmaster Kayak Series
– Kayak Anglers of Missouri