I arrived at the Gravois Mills ramp Friday morning ready to pre-fish for the upcoming tournament on Saturday. We received a lot of rain in the area for the last several days and storms were forecasted for Friday and Saturday as well. I was expecting to find dirty to muddy water when I arrived. To my surprise, the upper Gravois water conditions were much cleaner than I expected. My game plan, based on map study, was to run to the very back of a two-mile creek arm and search for bass in the shallows. I spent most of the day throwing spinnerbaits, square bill and a creature bait up on the bank and around docks. The bite was decent, and I had the most of my luck on the square bill. My most productive water was in the back half of the creek arm on the shallow side. I caught a lot of fish, but most were 12-14 inches with my biggest going 17.75”. I ended the day with probably 78-79 inches. That evening I went back and forth in my mind as to where I wanted to fish on tournament day. I knew what I caught on Friday was not good enough to win or even possibly finish in the top 10. By the end of the evening, I decided to launch and fish the same area since I had fish located and hopefully could catch a couple of bigger fish by grinding it out.

I woke up Saturday morning at 4:30 am and was at the ramp by 5:00 am. During my short drive to the ramp, I was going over the game plan in my head. I was not completely confident with my plan of running all the way to the back of Little Gravois Creek since all I caught were smaller fish in that area the day before. My mind kept running through other options as I was getting ready to launch. I launched at 5:30 and had the Torqeedo on high cruising across the main channel headed straight for the creek.

When I arrived at the mouth of Little Gravois Creek, instead of turning left to go into the creek I stayed straight and ran two miles down the lake to fish around a long row of docks. I decided to fish main lake docks hoping to find bigger pre-spawners staging on the docks. Talk about a game-time decision! I arrived at my starting spot a few mins before 6:00 am (first cast). I pull out two rods that had crankbaits tied on and got my kayak in position for the first cast. It only took a few casts to hook into my first fish of the morning on the square bill which was about 8”. I threw it back and felt that was a good sign there were fish in the area. About 3 or 4 docks and 30 minutes later, I hooked into my second fish. I fought it for a few seconds before it jumped and spit my crankbait. Probably a 15-16 incher. I continued to work the row of main lake docks for the next hour with no bites except for a single fat crappie. I was starting to get a little nervous that I made the wrong decision to fish the main lake instead of running up the creek. I checked the TourneyX leaderboard and noticed not many fish had been submitted yet. This told me the bite was slow for everyone this morning. 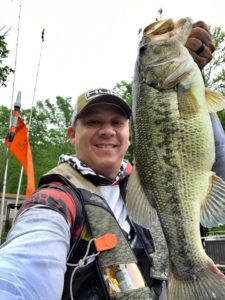 I came up to a little cove that had probably 8-10 docks in it. I contemplated skipping over the cove since I was still committed to the main lake docks. However, something in my head told me to go into the cove and fish it quickly just in case. I ran all the docks in the cove with my square bill with no bites. When I got to the very back, I decided to make a quick change and throw something slower. I dropped my Power Pole and tied on a shaky head with a baby brush hog.

My first cast with the baby brush hog was to a little private boat ramp in about a foot of water. I hopped it a couple times and felt it get heavy. I set the hook and it immediately started peeling drag from my spinning reel. After a decent fight, I landed my first fish of the day which was a 19.75”. Instant mood changer! I continued working the back of the pocket and caught five more fish off a little sea wall. Within 15 minutes, I had my limit with a kicker. Before leaving the cove, I put all my crankbait rods away and tied on a second baby brush hog and made the decision to only run the backs of coves and pockets the rest of the day.

My Torqeedo played a big role in this plan as I was running back and forth across the main channel hitting every cove along the way. I only fished the back 1/3 of each cove as I found that to be the most productive water. Just like the day before, I caught a lot of smaller fish but was fortunate to find one more 19.75” kicker before the end of the day. That fish finally put me in the lead after sitting in 2nd place most of the day behind Richie McMichael. He and I exchanged a few friendly texts throughout the day. I was not expecting to break 80” but making the adjustments to fish only the backs of coves and pockets proved to be a good one.

Shoutout to my fellow Drum Snatcher teammate, Troy Enke for helping me load my kayak at the end of each day. I was still managing a broken hand and his help is greatly appreciated!