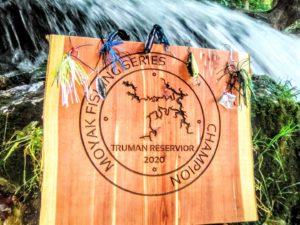 The MO-YAK Fishing Series Tournament on Truman Lake was a great time. I was able to spend some time practicing leading up to the tournament. The lake was being drawn down every day up until tournament day leaving many of my fishing areas dry. Focusing on the main Lake during practice I caught some good quality bass out of flooded bushes and even on the riprap of the Truman Dam. This bite was slowly fizzling out so I decided to try some river arms.

Practicing on one of the tributaries flowing into Truman, I was catching bass behind small islands and out in front of sloughs that had become dry or just had inches of water in them. I believe the fish had spawned in the sloughs and as the water fell they were making their way back into the river.

Arriving on tournament day, the water levels had dropped even more leaving the areas that I knew held fish, dry. With only a small limit around 10 in the morning, I decided to start hitting every piece of wood cover and brush piles I could. This paid off quickly with two 18 inch bass. 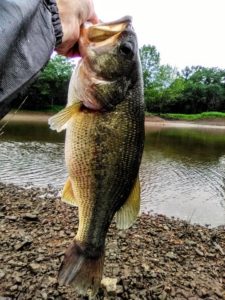 Knowing that I needed to get a good limit I tied on a buzz bait with the big storm rolling in and started rapid-firing cast to every laydown and brush pile I could I caught two more 19-inch fish and started improving my limit. With my confidence gaining momentum I worked into a dead-end slough that had some big log jams in it. Noticing some movement near a brush pile, I flipped a black and blue flipping tube into the pile and my line took off when I set the hook I knew I had a good one. Quite the battle took place and I eventually got the bass in. It was the big fish of the tournament at 22.50″!

Knowing that I had a good limit I decided to get all of my fish entered and even thought about calling it a day and getting back to Clinton. I checked the leaderboard and saw Lance Burris was in second place with around 93 inches, I believe, and I just didn’t feel safe.

I decided to tie on a Lucky Craft 1.5 and start hitting some laydowns near the boat ramp. I caught a few fish that would not upgrade me and then upon seeing a bluegill try to get away from something near a big laydown log I cast a few times before deflecting the square bill off the log and finally hooked up with a bass, the bass hung itself around the log and I eventually got it free and knew I had another good one this bass turned out to be a 21.50″!

I decided to call it a day after this bass and headed back to Everhart’s. It was just one of those days where everything worked out and the quality fish showed up. 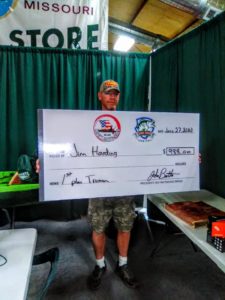