The very first Mo-Yak River Trail Series sponsored by Everhart’s Outdoors kicked off Saturday, May 15, 2021. Anglers had a full 12 hours and were allowed to fish any moving water between Hwy 65 and 63 in central Missouri. Nearly 30 individual anglers and eight teams accepted the challenge and had a great day of paddling adventure. In this first-of-its-kind event, for Mo-Yak, one of its’ earliest members triumphed over great personal adversity to take the win. Just weeks off major surgery and probably against his doctors’ wishes, Jim Harding bested Jeremy Mitchell by a mere quarter of an inch on this rainy Saturday on “River X”. Here’s his story…

For the river series, I fished a river that I would like to keep secret. It is full of quality size Largemouth for the size of the river, just a special place. I didn’t do any pre-fishing, I just knew the spot I was going to has produced in the past and I was going for broke. 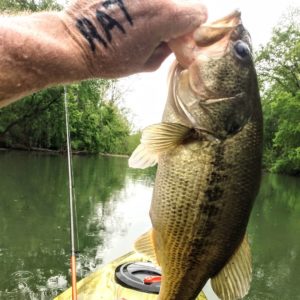 I didn’t start fishing until about 10:00 because of the heavy rain in the area. I concentrated on about a mile-long pool of water. I caught all my fish flipping a Yum Dinger in June Bug color on a Titan tungsten 1/16th Oz worm weight and a 3/0 Falcon EWG hook. I was flipping sawdust and log debris piles that had piled up from recent high water. The piles were loose enough that you could cast on top of them and your lure would sink underneath them that’s when the fish would hit. I was using a medium-heavy bait caster with 15 lb test so I could get the fish out of heavy cover.

A couple of fish gave me a run for my money when they hung up in the bushes and I had to go use my hands to get them out. It was a nice day on the river and I had it all to myself except for a bobcat and some wild turkeys.

I only had five bites all day and landed all five. The fish were active in the morning during the light rain but as soon as the rain quit the bite shut off completely. All my fish were in one to three feet of water

I think the river series is going to be fun for all who enter!