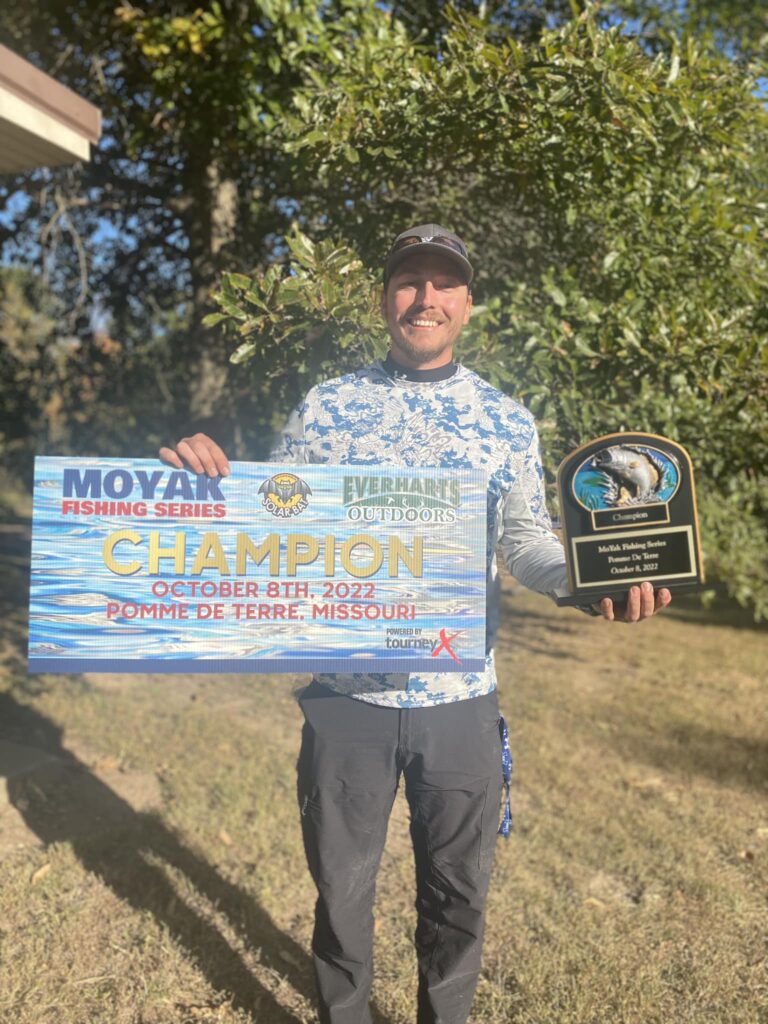 A beautiful late summer Saturday greeted a 62 angler field on potato lake, errr, Pomme de Terre for the final regular season event of 2022.  The Angler of the Year race on the individual side was too close to call going in with several anglers knotted up at the top.  Although the team side had one more event to go (Mo State Championship) it, too, was going to come down to the wire.  Pomme gave us numbers this time but was lacking in quality. MoYak came away with an FPA (fish-per-angler) of 5.56 and 64% of the field submitted a limit of bass.

After the whistle blew, Columbia’s Chris Robbs came away with his first win with MoYak, beating perennial powerhouses Lance Burris and Dorman Hughey by 1.5″ and 3″ respectively.

On the team side, The Burrito Banditos (Yours Truly & Richie McMichael) beat out the CoMo Crushers with 156.50″. This set the stage for a shootout at the Missouri State Championship between the Banditos, the Crushers, Team Bonafide, and Shake & Bake.

Here are your top ten for the 2022 MoYak Stop #7 Pomme de Terre presented by Everhart’s Outdoors.

Let’s see how the top FIVE figured it out;

Chris – My strategy was to stay around the bait fish and thoroughly fish every piece of cover I could seek out close to where the bait fish were holding.

Lance – With the cold front I planned on going into full prefish mode, cover water with 7 different rods as fast as possible to reveal a bite then slow down, some.

Richie – Start the day off with a buzzbait and plopper and get a couple decent keepers early to start of the morning then switch over to a spinnerbait/bladed jig and fill out a limit. If that didn’t work , I was gonna slow down and flip laydowns. Found the golden shiner bladed jig was working and used it most of the day.

Troy – I like to power fish shallow. I planned to fish top water all day.

Chris – I was able to pre-fish. I really wanted to have a strong finish to the season to help reach my goal of making the top 10 in AOY, so I went down to the lake a couple weeks prior to the tournament for a couple days to do a little fishing and really just explore places on the lake that I was interested in fishing. I was also able to get on the water for a few hours on the day before the tournament to do the same thing and see how the bite may have changed in those couple of weeks. The biggest help was getting to eliminate places I fished, I really focused on trying to find places that suited my style of fishing and if it seemed to be holding bait or fish.

Lance – Had no time to prefish so I just fished history so I didn’t have to break down new structure.

Richie – Was not able to prefish

Troy – I checked the closest ramp to my house the Wednesday before the tournament.  I saw tons of baitfish action and fish were busting on top right at the ramp.  I threw a few casts with a buzzbait from the bank and caught a 15″. I knew I’d start there after that.

What was your best finish on Pomme before this?

Chris – I had to travel about a mile to get to where I wanted to start fishing and I was fishing the upper end of the lake.

Lance – Only covered about 4-5 miles of shoreline on the south side of the lake.

Richie – Started in the river and went as far as I could paddle.

Chris – I was looking for fish up shallow, pretty sure everything I caught was between 1-6 ft of water. Water temp was in the mid 60s and had about 2ft visibility.

Lance – I don’t fish deep so I beat the banks with minimal clearity and temp ranged from 59-65.

Chris – I managed to land the 2nd place big bass! It came pretty early in the morning and was the fish that got me my limit so I was extremely happy about getting my 5th fish and the fact that it was a quality 18.75″ kicker. The fish was holding in a shallow lay down and I ran my spinnerbait right through the heart of it and BOOM, the big girl just sucked it right in!

Lance – Lake was the lowest I’ve ever fished it so dealing with bass boats where I was wasn’t a problem. As I pulled my chatterbait out of the water, biggest fish of the day came half way out and ripped one of the legs of my trailer off. Would have given me close to a 2″ cull.

Richie – Every day on the water is special.

Troy – I had to stop throwing the Frittside squarebill because I couldn’t stop catching white bass.

Chris – Saw deer and bald eagles, just a great day to be outdoors.

Lance – Saw an old eagle, it was bald.

Richie – Pretty quiet day for wildlife but did get startled by a few bats that flew over me.

Troy – I was greeted by a wild Hughey at the ramp. We started together in the same cut across from the ramp.  A friendly wager on first bass ensued and was won by yours truly on my third cast.  I have since framed that dollar.

Chris – Yes, two…The first I am not sure of what it was but it broke me off quickly, I have a feeling it was a toothy critter but whatever it was it was not small! The second one was for sure a bass and it was with 10 minutes left in the tournament right at the boat….I made the mistake of forgetting to adjust my drag after switching baits on my rod and I thought for sure it was going to be what cost me the victory because we have too many good fishermen in this club to give anyone even a quarter inch.

Lance – The one that got away.

Richie – No, saw a biggun swipe at my bait but did not hook up.

Troy – I had a 20+ erupt on my buzzbait after a long drought of no bites. I got three cranks of the reel handle on her and she was gone.  I had lots of short strikes and weird hookups that day. 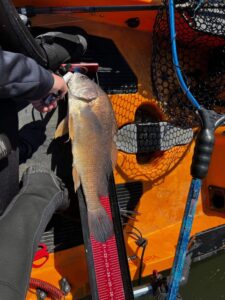