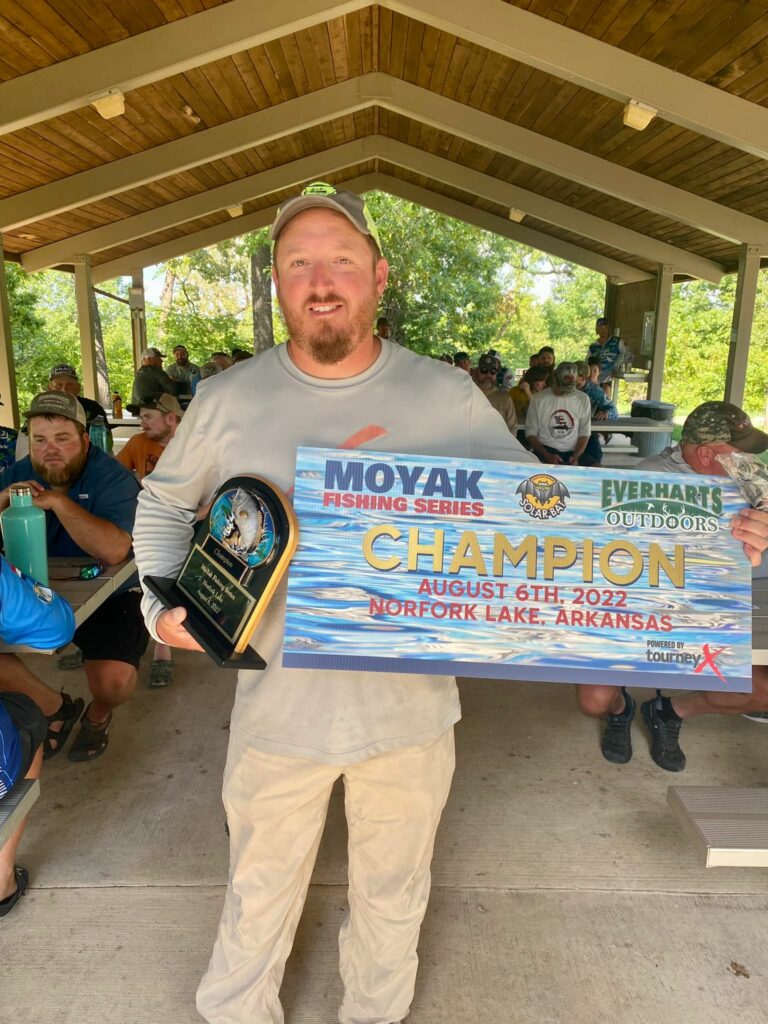 The drought of 2022 continued as 59 anglers ventured south of the border to Norfork and for some, this drought included a lack of quality bites to go along with another blast furnace of temps pushing 100 at takeout.

The dog days of summer continued as our FPA (fish-per-angler) was 3.97 and only 46% of the field submitted a limit of bass.

After the dust settled, Eli Powers from Arkansas came away with the victory by over 3″.  Eli didn’t respond to the questionnaire we sent but if he does happen to follow up, I’ll add his responses below. Here are your top ten for the 2022 MoYak Stop #5 Norfork Lake presented by Everhart’s Outdoors.

Let’s see how FOUR OF the top five figured it out;

Chris – I planned on catching 90 inches on a big swimbait before 9pm, and my Plan B was more of an emergency plan if I couldn’t get a bite on the Big Swimbait. Plan B was to throw a jig.

Tommy – Just trying to catch a limit since I haven’t done that in the last couple of tournaments.

Micah – Catch quantity and hope that a few quality fish popped up in the back of a river arm.

Jeremy – My only strategy was to grind it out and throw different lures until I found some type of bite. I am not a power fisherman so I tend to slow down and throw creature baits.

Chris – Yes I got 3 hours of prefish in the afternoon three days before the tournament. I mean sort of but not really, I would’ve done the same thing if I hadn’t prefished. In prefish I caught a 14  incher on a jig, then threw the big swimbait to locate fish, which I did.

Tommy – Was not able to prefish but did stop and look around at the ramps of a couple of spots that I had picked out.

Micah – Yes, prefished the main lake and the back of a creek arm the day before and decided to not fish the main lake because I’m not as comfortable with it and it didn’t produce as well in prefishing.

Jeremy – I don’t get a chance to really pre-fish any tournaments due to work and kids. So, this one was not any different.

Had you ever fished Norfork before this?

Chris – Not really, the only experience I had before the tournament was that three hours of prefish three days before, and honestly that was just more of almost exploring rather than fishing.

Jeremy – This was my first time Norfork. It was a great-looking lake and to me, it fished similar to Bull Shoals Lake.

Chris – I used one brown and blue jig with the same okeechobee craw on the back all tournament, and caught one on the big swimbait

Jeremy – My day started with throwing a white quad buzzbait for the first hour or so. I caught a nice 15-inch bass within the first few casts. I missed a few blow-ups and then it shut off. From there I slowed down and started throwing a jig and soft creature baits. I never got a hit on the jig (which is my go-to bait).

Chris – Started at the ramp and went left, but I ended up catching my last fish a couple miles away from the ramp.

Tommy – I stayed within a half mile of the ramp, Upper end. It looked like areas that I would fish around here

Jeremy – I put in at Cranfield and went up East Pigeon Creek. I don’t know how far I went on the water but I didn’t go up the creek too far.

Chris – I was fishing, at most, 4ft usually less, but if I wasn’t sitting in 15ft I wasn’t getting bit. I could see around 12ft most places, my water was mid to high 70’s

Tommy – I fished everything in the area. My 2 biggest fish were caught early and shallow; everything else was in about 10′ of water. Water temp was around 76 in the morning and warmed up to around 81 before I got off the lake. The water looked a little green around the ramp but cleared up towards the river.

Jeremy – Most of my fish were caught in the 2–10-foot water depth. Later in the day I started fishing a little deeper 15-25-foot depth. I caught my 18.25″ bass in about 20-foot of water. I keep it simple and don’t really pay attention to water temp or clarity. I just try to fish the water I’m in.

How did you stay cool out there?

Chris – I didn’t stay cool, heat wise of menatlly wise. Lost my 5th fish twice and that really got to me, because they were back-to-back casts, but the skill of keeping a cool head probably comes with age I imagine.

Tommy – Had a lot of drinks in the cooler and I dunked my feet a few times to help stay cool. I got off the lake around noon because I was going to try and change spots but decided it wasn’t worth the effort after driving over to the other spot. Ended up just going to Wendys for lunch.

Micah – People stayed cool out there? There must be a secret I don’t know about.

Jeremy – I kept hydrated and I tried to find shade when I could. I was tempted to stop and take a dip but I couldn’t make myself stop.

Chris – The fifth fish, I caught it by casting behind 3 bushes sticking out of the water, and about 4 seconds after it bit I was panicking on how I was going to get this 3lber in, and it just made a probably 2ft jump over the bushes, it was pretty cool.

Tommy – Happy with the way it turned out but if I had it to do over I probably would have launched somewhere else or tried running up the river right after I made my first pass along the bank where I caught my big bass. 5 or so others launched at the same ramp and pretty much everyone headed up the river as soon as they could take off. I just made a quick circle of the area to try and see what was around and made my first cast along the rip rap of the boat ramp. I got desperate around 1030 or so and started to head up the river but gave up once it got to about 5′ of water. I’m sure there were probably some good holes further up but Lance Burris and others had already picked them apart so I figured it would be a waste of time.

Micah – I gave up my spot to some teens on a bass boat that hadn’t caught anything yet. I was catching a lot of small bass and decided to move off that school to have a chance at something bigger. 2 min later I landed the Big Bass of the day at 21″. Filmed this and the rest of the day on a GoPro, just posted the video on my new channel. https://youtu.be/UtfrSlVe1KQ

Jeremy -Nothing really special at all. I decided to leave my house at 12:30am and got to the ramp around 2:45am. Then I took a truck nap at the ramp. One of these days I will get a chance to pre-fish and stay the night somewhere closer to the lake. My 18.25″ bass was caught on a Trench Hawg. I had to boat flip it because when I grabbed my net it got stuck in my 360 light. Luckily, I didn’t lose it.

Tommy – Had a beaver swim to within a couple feet of me without it clapping its tail. It just swam on by.

Micah – A couple eagles and lots of turtles and gar.

Jeremy – I saw a few deer but that was it.

Jeremy – I didn’t lose any fish. I only caught 5 fish in total.

Trash Fish Winner – Steve Earls (His 2nd event in a row as the garbage man!) 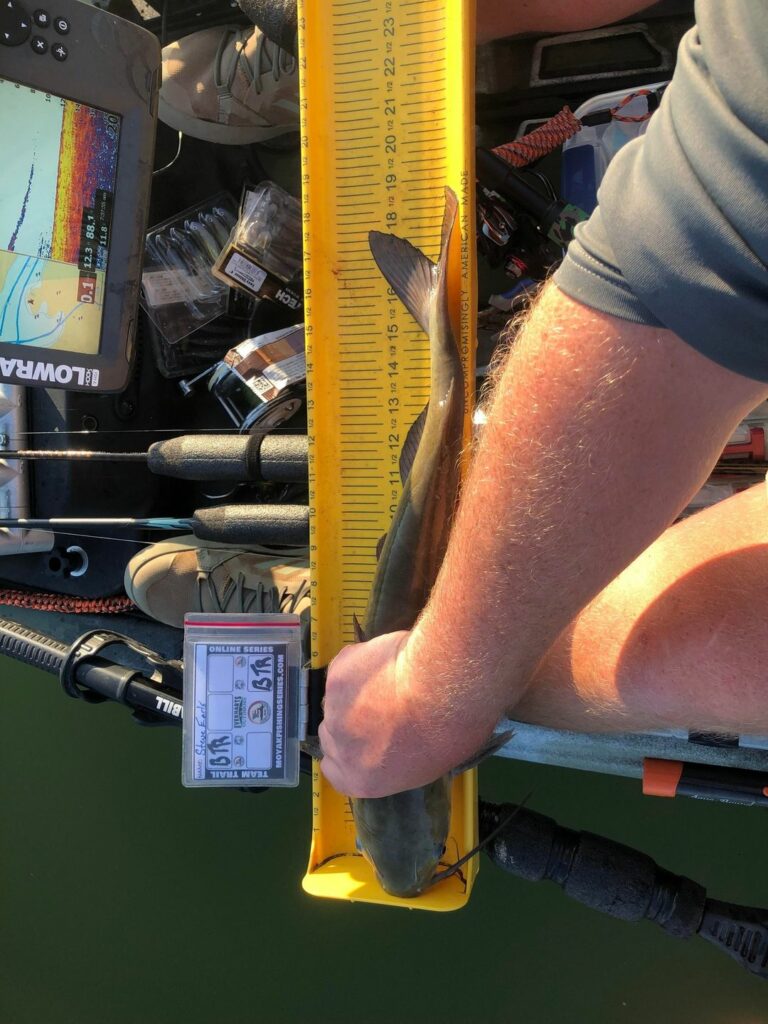 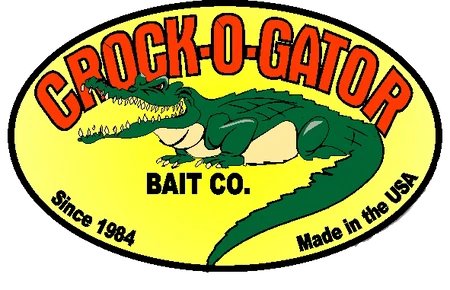 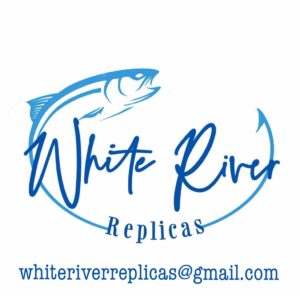 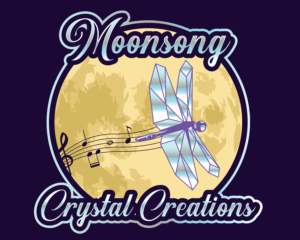