Brian Hillman and I began prefishing up the James River arm of Table Rock on Wednesday near McCord Bend. We found 76-degree water and lots of surface activity. Clouds of shad were swarming the flat across from the ramp. I headed for them and immediately hooked up with a fat 16″ largemouth on a black and blue zMan Chatterbait in 3 feet of water at the edge of a shade line. I continued fishing the flat with a shad colored Rat-L-Trap and hooked into a giant that I never got to see. It straightened one of the trebles and left me wishing I would have upgraded those stock hooks. We both had decent limits by noon, high 70″s for me and mid 80″s for Brian. Although the area was full of 13″-15″ bass and absolutely packed with baitfish, I never got comfortable there. I knew there would be a lot of pressure in that area of the James as it traditionally holds winning fish during Table Rock tournaments. Also, the water was dropping. I wasn’t sure how that, combined with the coming weather change, would affect the baitfish. Forecasts were calling for a mixture of clouds and sun, highs in the mid 80’s, chances for storms and potential 30mph gusts… so, typical Missouri weather, lol.

6am, Thursday prior to the tournament, I decided to launch at the Old Hwy 86 Public Use ramp and fish the islands in front of Clevinger cove and probe some of the shallow cuts near its mouth. The lake was calm and it was 74 degrees. Water temps were 77-79. There was a bass boat on the first island so I kept pedaling my PA12 to the north shore of Clevinger. After getting no love on the first bank with a Whopper Plopper, I noticed a submerged point on my Garmin and got on top of it in 10′ and threw out into 25′ and hooked up with a 17.75″ smallmouth on a brown/orange 3/4oz Pigsticker Quick-5 football jig with a magic craw colored 3″ Berkley Chigger Craw trailer. I got another bite on that point and missed it. I made a move to the shore and picked the Whopper Plopper back up and didn’t set it down for the rest of the morning. I caught three more bass on the plopper over 15″ in the next hour, one a 20.5″ brute on the main-lake side of an island. I hadn’t fished in this cove since I was 10 years old but I knew where I was going to fish all weekend. I packed up and headed to the house around noon.

Friday was spent running errands. Brake line repair on my truck, trailer light fixed, re-rigging baits, paring down tackle, meal prep, etc. Then, it was off to checkin where I dropped off supplies for Sunday’s post-tournament nacho bar and finally headed back to Nixa to try and get some sleep.

I normally take about 30lbs of tackle with me, because, I’m a freak. I ended up taking 3 small Plano waterproof boxes, a Ziploc full of plastics, some terminal tackle, and eight rods. After the dust settled Sunday, I really only needed to take 3… one with a jig, one with a plopper and one with a pop-r.

Saturday
Saturday morning I began the same way I had practiced on Thursday. I hit the island first and lost my first four fish on topwater with the Yellow Magic popper and Whopper Plopper. One a heavy 15″+ that came off at the boat as I was reaching for my net. I kept pedaling and firing. I knew I was around quality fish and I just needed to make as many good casts as I could. I knew the weatherman had said southerly gusts to 20mph later in the day, so I headed for the north shore while I could hold there safely. I caught a 15.5″ with the Plopper there, if memory serves, to get the skunk off and get me on the board. It felt so good to get some redemption after losing those first four, it’s almost like they were short-striking in the low light conditions that morning.

Next, I headed to the south shore of Clevinger as the wind started to pick up. I kept the Hobie in 3-5′ of water as I worked back and forth in the coves near the outer third of the creek. I limited out with the T1000 colored Whopper Plopper 90 on 25lb test Trik-Fish mono with my Daiwa Tatula elite reel on a 13Fishing M/H Blackout rod. I checked the leaderboard and noticed I was in 2nd with nearly 81 inches. As the south wind increased, I pedaled out to a point near the 3mm of Long creek and picked up the jig. On my first cast, I landed a beautiful 18″ smallmouth which put me in the lead. I continued fishing the point and noticed my graph was lit up with fish in the 20-25ft range. My next few casts were swings and misses as it felt like the fish were picking it up and dropping it before I could get a hookset. This bank was loaded with feeders! 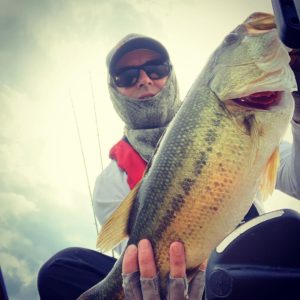 Finally, I tried casting up to the shelf rock at the edge of a channel swing. My jig landed in about 12′ and was smashed by a 17.75″ largemouth. I put her on the board now I’m flirting with 90″! Just unbelievable. My next cast was to the base of a cedar sticking out of the water on a shelf in 10′. The shelf dropped down into 30′. At the bottom of that lay the largest tournament fish I’ve ever caught. She slacklined the PigSticker jig and I could barely keep up with her as she rocketed to the surface. I kept the line tight and drug her out over deep water where I let her tire herself out, which, seemed like an hour but was probably only a minute or two. Finally, I put the net under her and just sat there stunned at what just happened. 94″ before noon, on table rock, in late summer, in a kayak tournament, that’s not normal.

I had a 10″ lead on 2nd place and decided to head back to check in early. I had to try and get my mirage drive repaired before OMTC closed and I needed to get some more jigs and trailers. Jason at OMTC took care of me but my tackle shop was closed for inventory. I got back to the house and found one more PigSticker as insurance in case I lost my first one.

Sunday
As I launched at 6, the wind immediately began blowing out of the southeast. I headed in that direction to try and keep the wind in my face to help with boat control. I fished toward the back of Clevinger and noticed lots of surface activity but they wouldn’t take the Plopper or Yellow Magic. I kept pedaling and firing. Around 8:00am, I worked my way back out and as soon as the bank rocks started to get larger I hooked up with a 18″ and a 14″ and got on the board.

There was a bit of a lull and around 10:30, I checked the scoreboard and noticed something terrible had happened.

I mistakenly wrote TJC instead of TJZ on my identifier card. I was beset with all kinds of emotions. Anger at myself for making such a bonehead mistake, rage about the fact that we have to physically write something on a piece of paper in order to deter cheating, but mostly, regret for not double checking my card at the ramp before I launched like I always do. I kept pedaling and firing.

I was in the outermost cove on the south shore and I continued to throw the Plopper as I worked this sheltered area as best I could picking up two 15″ers while the wind howled overhead and whitecaps crashed onto the north shore. Nobody had been on that bank in two days in the afternoon. I knew the wind had pushed bait up there and I knew the normally gin clear Table Rock water would be cloudy. I just needed one of those typical Missouri hourly weather changes to happen.

A few minutes later, the storm clouds to my west began to form and the wind died just enough that I could make it to the north shore. I kept firing as the wind pushed me along the bank. 100 yards into my first bank at the base of a huge willow tree an 18″er erupted on the “Willy-P” in 4ft of water. I immediately hit the power pole and anchored while I boat flipped the thrashing largemouth. Pro-tip, never boat flip a green fish with a mouth full of Plopper. I narrowly avoided a treble hook to the shin, toe, hand, finger, and the elbow as she bounced all over the floor. I got her on the board around 1:50 and began fan casting while the power pole held me in place. Waves began crashing against the stern again as the storm clouds grew darker. With no more bites in that area, I began drifting again and threw the Plopper at the base of another willow tree. A 14″er smoked it and after entering it into TourneyX, I could finally relax. REDEMPTION. I was euphoric. I was so happy with myself for deciding to keep pedaling and firing even though my first 32″ were DQ’d. I never gave up. Ike knows and now I do too. You are always in it. Just keep firing at em’. 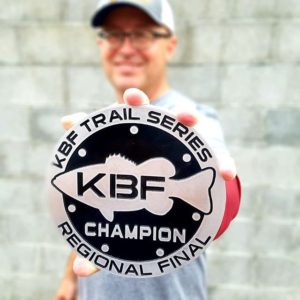 Thank you to Joshua Boothe, Jeff Mellencamp, Richy Laughery, Brian Hillman and the whole MoYak Crew for organizing everything. Thanks to my wife, Rebekah, for letting me go play in the water on the weekends and to all the sponsors who help pay for these contests.