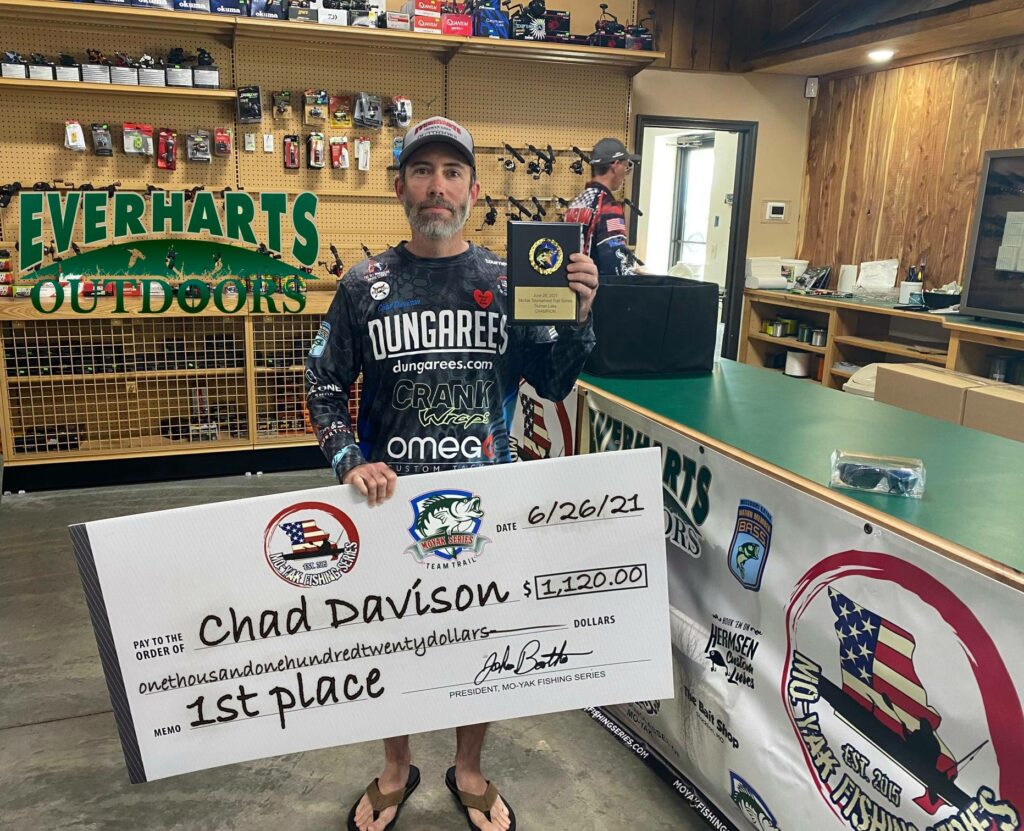 Torrential downpours brought up to seven inches of rain to parts of the lake during the days leading up to and including gameday on Truman. The wind and rain only helped Chad Davison hold on for a mid-summer win on the Mo-Yak Fishing Series presented by Everharts Outdoors. Here’s how he solved the puzzle…

What was your strategy going into the day.
My plan was to start with topwater. I had a good topwater bite on a whopper plopper early. After the rain ended, I caught a lot of fish on wind-blown 45 deg rock banks with a squarebill.

Were you able to prefish and did you find anything that helped you on game day?
Yes, I prefished one area on Thurs and didn’t catch much. I tried a different area on Fri, and found some biting fish. It definitely helped for game day having an area that I felt had fish and some confidence baits.

What was the general tackle you used to win?
Mainly a whopper plopper, a bluegill Crank Wraps 2.5 squarebill, and a mag trick worm on an Omega Mag Shaky Head.

Anything else special about the day?
Awesome to get my first kayak event win.

Big bass story?
My big bass came on the mag trick worm pitched to a big tree on a main lake point. After I hooked it, it jumped several feet out of the water and made my heart stop!

Lose any bigguns?
Lost one early on topwater right at the net that would have helped but ended up not needing it

How far did you have to travel to find your fish?
Within a couple miles of launch

What depth range were you looking for?
Fish were in 5’ or less

Did the weather affect your bite?
Definitely rain and wind were key to my bites.

Do you plan to fish the remaining MoYak schedule?
100%, YES!

Are there things that MoYak can do better?
I have been really impressed with MOYak. Just keep doing what you are doing…it is obviously working!