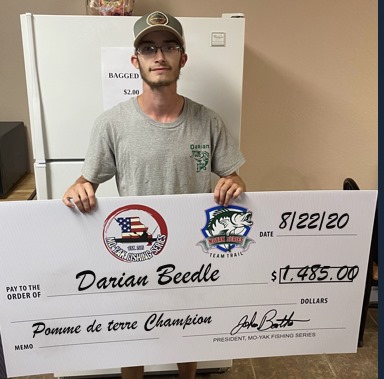 to grab not only his first win but to also set the record for the largest margin of victory in a live event and tie for all-time Big Bass!  Follow along as he shares his day.

It all started with prefishing the weekend before the tournament. We had started in Pittsburg on the lake and I caught a few on crankbaits but not enough, so my team partner and I loaded up and went up into the river and caught some but saw what we needed to see.

On tournament day we got to the put-in and there where probably 10 kayaks putting in on the river section. At first launch, everyone took off, most went down toward the lake but my partner and I followed 3 other kayakers up the river.

I started off by throwing a wiggle wart, buzz bait, and whopper plopper but quickly realized topwater wasn’t the answer so I just continued on with the wiggle wart. I had my first 2, both 18.75s, on the wiggle wart by 7:30 and caught the other 2 about an hour later by adding in a spinnerbait. Then the bite just died but I just kept throwing the wiggle wart and spinnerbait.

It wasn’t long after we turned around and headed back toward the ramp that I tossed my spinnerbait over a laid down tree in the water and as soon as I zipped it over and let it drop over the log a fish knocked the crap out of it. Well, that was the big fish for the day. It weighed 6.6lbs, my personal best to date.

After that I caught 2 or 3 more but nothing that helped me. But, overall it was an amazing time on the water. I learned my biggest lesson that day though, you can always catch fish behind other people just stay confident and keep that line in the water.